Bear shamans are able to equip the heaviest priest armor (medium) and are the sturdiest of all the priests. Capable of mighty combos with their Two-handed weapons, and a complement of druidic enchantments, this makes them fearsome enemies in combat.

Since ages long passed, certain gifted individuals – often referred to as wise men or wise women – have held a special, unbreakable bond with the spirits of nature. Within many of the primitive societies found among the hill tribes of Cimmeria, these men and women are held in particularly high regard due to their ability to call upon the powers these spirits possess. For these and many other Cimmerians – a people whose lives are greatly influenced by the creatures of nature that surrounds them – anyone who can tap into these powers is considered to be of great importance and wisdom.

Those of them who decide to leave their tribes and head into the world of great adventure, often call themselves Bear Shamans. With their ability to perform ancient rites and call upon the spirits of the bear, the Bear Shamans are a valued addition to any group of adventurers who wish to tackle the challenges of Hyborian reality.

The Bear Shaman has received the more physical aspect of nature – while the Tempest of Set will conjure up lightning and storms, the Bear Shaman focuses his power and energies towards himself, aligning himself through shamanistic rites with the spirit of the bear.

The Bear Shaman represents two sides of nature – Tranquility and Fury. The tranquil side of the Bear Shaman allows him to utilize powerful magic to heal himself and his friends. Tapping into the power of the wind, the Bear Shaman may heal both himself and his teammates by utilizing the very forces of nature itself. The Renewal spell gained at level twenty is one of many healing spells the Bear Shaman will have access to. His ability to resurrect friends who fell in the midst of a bloody battle becomes available to him at around level thirty, but the spell will become more and more potent as the Bear Shaman grows in power – allowing him to further diminish the detrimental effects of death.

In Age of Conan there is also something called “cone healing” which is basically a feature where the caster can heal everyone in front of within a certain distance. The first of these spells is Blood Flow received at level ten. Instead of having to target specific members of your party or casting an area of effect spell, the Bear Shaman must face those he wish to heal. Far from being an observer in battles, the Bear Shaman will also have to heal himself to remedy the injuries sustained through fighting. As such, the “Blood Flow” spell will also heal the caster – although with lesser effect.

One of the furious sides of the Bear Shaman allows him to use various weapons in order to engage in melee combat. Known to be more than able fighters, the Bear Shaman will learn to master several tools of death – such as two-handed blunt weapons, thrown weapons and even bows at later levels. Through practice they gain access to various melee combos that will allow them to perform violent, damage-dealing maneuvers with their weapon.

Calling upon the spirits of the bear, the Bear Shaman can boost both himself and those who travel with him. As the great transparent shape of the bear rises up behind him to transfuse the powers over to the caster, the Spirit of the Bear spell will increase the caster’s health. Caving into his furious nature, the Bear Shaman will gain access to the powerful Lycanthropic Bite spell at level eighty, a spell that will take a percentage of the melee damage the Bear Shaman does with both normal and combo moves and convert it into healing. The Grizzled Hide spell will increase the defense rating of all teammates, but only if they remember to stay close to the bear shaman. Moving too far away from him and the effects will disappear. This will urge teammates to stay close.

The Bear Shaman can empower himself with various Manifestations, Runes, and Claws.

Manifestations increase the Shaman's damage capabilities, along with boosting stamina and mana regeneration, while providing a debuff to nearby enemies. A Bear Shaman can use the Internal Bleed ability to inflict a unique debuff depending on the active Manifestation. An example being Manifestation of Spirits, it decreases nearby opponents damage dealing ability, and its IB is World Walker, which does unholy damage over time ending in a big burst of damage.

Runes can protect the Shaman and his allies from magical damage, increase their melee damage, or heal nearby allies. An example is Rune of Regrowth, which heals all allies near the Shaman for minor wounds.

Claws are self buffs that allow the Shaman's melee attacks to curse the target. An example of this is Claws of Stone, which increases the Shaman's armor, and when allies attack the cursed opponent may gain a damage absorbing shield for several seconds. 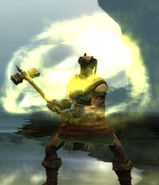