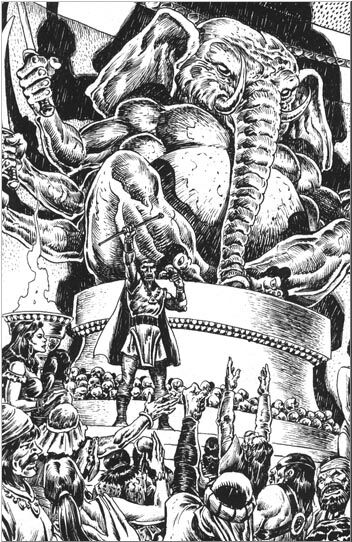 Bel is a god of thieves worshipped in Zamora. His name is used to identify other thieves by stating "In the name of Bel!".

Bel, god of thieves, appears in some versions of the Shemitish myth-cycle, and his rather peripheral episodes are thought to be later additions to the myth. Also, the Zuagir nomads and thieves of Asgalun point to his exploits in proving that their nefarious acts are blessed by Bel himself.

According to legend, in the time of the Elder Gods, Bel used his dark powers to conjure an army of undead thieves, with which to plunder the wealth of all nations. In desperation, the people of Shem called on the goddess Ashtoreth for help. In the ensuing battle, Ashtoreth severed Bel's sixth arm with her mystical blade. Soon, Bel was exiled into present-day Zamora.

None has ever seen the face of Bel, as befits a god of thieves, though several idols and amulets depict him variously as a stocky dwarf with a grinning face, a six-armed elephant man, or a lithe panther-like human wearing a black mask. Bel is worshipped, or at least paid tribute to, by all who "earn" their living as thieves, outlaws, and beggars.

The priesthood of Bel is independent in each major city and region, to prevent the frequent actions against one thieves' guild or temple from spilling over and affecting others. In areas with a single guild of thieves, the temple or shrine of Bel is usually connected to the guild hall via underground tunnels. In large cities with competing guilds, such as Arenjun, the temple is in an underground location and is recognized as neutral ground by all sides.

To maintain their benefits, priests of Bel may never buy or trade for anything. Should they slip, Bel can only be appeased by a sacrifice of stolen goods ten times the value of an item purchased.

The priests of Bel speak their own secret language.

Retrieved from "https://aoc.fandom.com/wiki/Bel?oldid=59204"
Community content is available under CC-BY-SA unless otherwise noted.