Conquerors are a sword-wielding fusion of heavy armor and battlefield command, rare individuals rising from the ranks of Aquilonian generals and barbarous Cimmerian war-leaders.

The conqueror’s martial might is almost unparalleled and they manipulate those fighting around them inspiring allies, demoralizing foes and drawing strength from the fury of battle.

Conquerors are capable soldiers but their ability to augment their allies with battle-cries and inspirational auras, as well as causing disarray and degrading the fighting capability of the enemy make them unmatched masters of the battleground around them. They wield formidable two-handed weapons and can dual-wield for even more offensive power.

Conqueror has access to the Frenzy Stance and Defensive stance, but can also go in a normal stance.

The Conqueror is the heart and soul of any party in Hyboria. Conquerors fill two roles, first, as an impressive fighter on the front lines soaking up the damage and dishing out damage of their own, and second, as an inspirational presence that makes the party prevail where it would normally falter. All foes that get within the conqueror's reach fall before their weapons, and all friends that stand nearby find themselves heartened, ready and eager to carry on the fight. A party without a conqueror may be mighty indeed, but a party with a conqueror becomes a band of heroes with almost legendary abilities.

To protect themselves from the dangerous world outside, conquerors have access to everything from the flimsiest of cloth armor to the most protective full plate, but do not gain access to shields. Conquerors tend to be a bit more offensively-minded as a class, preferring to either dual-wield two one-handed weapons or to use a single large weapon to smite their foes. Unlike the barbarian—which focuses on putting out as much damage as possible in a short amount of time—conquerors are a bit more conservative. Their combat training focuses primarily on effects that help the group as a whole, though they remain fierce and deadly opponents in a one on one fight.

Conquerors wielding two-handed weapons make for tremendous fighters in their own right, and there's always the matter of that huge sword they're carrying. The tanking oriented conqueror can deftly retaliate enemy attacks, ocassionally restore health with their attacks, and further increase their damage mitigating abilities.

The conqueror isn't just a deadly fighter, however. Rather than a magician's spells, the conqueror has beneficial Formations and Disciplines, for themselves and nearby allies. Disciplines and Formations often provide passive effects, and can be offensive or defensive in nature.

Disciplines can be consumed to create a much more powerful temporary version of the Discipline for the Conqueror alone. An example would be Discipline Retribution, which increases the groups armor and protection while providing damage to their opponents when they're struck, consuming this Discipline places a stronger effect on the conqueror along with a temporary damage absorbing shield.

Using Formations the Conqueror can plant a banner that can buff allies or damage enemies depending on the previously active Formation. Some examples are; Fire Weave, the banner of which deals Fire damage to nearby enemies; Thunderhead which increases the groups evade and immunity chances, the banner drains mana and stamina from nearby foes.

Along with providing beneficial buffs to allies the conqueror also has an in combat ressurection ability, which partially restores their health and can be improved to a full health using feats. This ability alone makes Conquerors sought out for raids and groups where a dead ally can make the whole difference.

While an inspiring leader and a benefit to their team, the conqueror is also a ferocious fighter in their own right that's not to be trifled with, especially as conquerors are usually surrounded by several of their biggest and meanest friends.

Conquerors will often be expected to off tank, usually letting a Dark Templar or Guardian be the main tank. Using the various buffs and banners at their disposal the Conqueror is often expected to maintain auras for his allies, while demoralizing and debuffing opponents. They are a necessity to any raid due to their in combat resurrection ability. Most Conquerors consult each other to maintain unique buffs amongst their allies, maximizing their potential. Most Conquerors in endgame situations will find themselves using the Brute feat tree to maximize tanking potential, and very rarely specialize in Carnage. 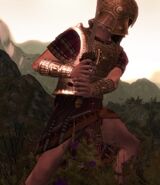