A dynamic solo instance in the Savage Coast of Turan pack is the dangerous pirate island of Dead Man's Hand. This instance scales to your level between 50 and 80 and can be played in the same rotations as Age of Conan's other daily instances.

Players are sent to the island by Conan's old ally, Artus, and the narrative ties into part of the greater storyline that players will discover in and around the city of Ardashir. Artus wants the players' assistance in rooting out a traitor within his own ranks. The player must investigate events on the island and interrogate the characters that are suspected of being involved in the betrayal.
The pirates have made their home on the island despite the presence of indigenous savages who live in the swamps in the center of the island. These dangerous primitives have some strange rituals and are a constant threat to the pirate encampments.
The island has some fantastic visual diversity. Despite the almost tropical location, the skies are blackened by the constant ash cloud that belches out from the volcano on the island. This also means that there are thermal springs that create dangerously hot geysers in the arid rock valley that sits beyond the main pirate encampment. 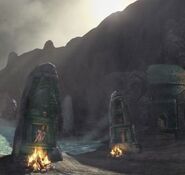 Turanian Armour
Add a photo to this gallery
Retrieved from "https://aoc.fandom.com/wiki/Dead_Man%27s_Hand?oldid=58624"
Community content is available under CC-BY-SA unless otherwise noted.