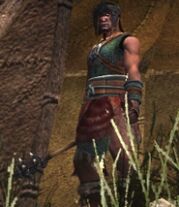 Among the beleaguered and exhausted Cimmerian warriors of Conall’s Valley, the name of the war-leader Kern Wolfeye is spoken with a clashing mix of hatred and respect.

Kern licked a dry tongue over his cracked lips. His cold-ravaged face, his amber, lupine gaze. He looked like a creature out of the blizzard. Like a wolf. Savage and strong.

“To answer your question,” he said. “Yea. I hunt the Vanirs. And the Ymirish. And they might well be my father’s people.” Brig saw how the admission hurt. A quick flash of pain behind those yellow, unblinking eyes. “But my mother was Cimmerian, by Crom, and so am I.”

Among the beleaguered and exhausted Cimmerian warriors of Conall’s Valley, the name of the war-leader Kern Wolfeye is spoken with a clashing mix of hatred and respect. While other clan leaders counsel patience and the gradual buildup of their forces, Kern knows that his people are as good as dead if they do not fight to take back their homeland now.

As the days turn into months, it is the Vanir who grow stronger and bolder, not the Cimmerians. Kern sees the bodies of his people impaled on spears; he sees their villages burned to charred cinders and scattered by the wind across the rocky ground; he sees the patrols of well-armed Vanir defiling the Field of the Dead —and he wants to kill every warrior of Vanaheim in the valley before it is too late.

His name comes from his eyes, which are eerily yellow, much like the Ymirish people of the far north. Much of the mistrust that he shoulders from other Cimmerian chieftains comes from their prejudice about his eerie eyes, his pale flesh that never darkens with a tan, and his yellow hair, all revealing the truths of his Ymirish blood. Relations are further strained because Kern is an exile from his own clan, banished by Cul Chieftain, over a matter that differs with each storyteller and rumormonger relating the tale.

Wolfeye is a reluctant war-leader, despite having the skills and integrity of a man born to command. His ambitions arise not from vanity or a hunger for power, but from the knowledge that if nothing is done to fight back the Vanir now, their final chance will be lost and Cimmeria will fall next.