An ancient empire, stronghold of the world’s greatest and most renown wizards of the eastern world, Khitai has a powerful army and a sound leadership based in Paikang, Shu-Chen, and Ruo-Chen. Khitai is forever at war with Kambuja in the south, whose god-kings compete with them for supremacy in the arcane mysteries of the Scarlet Circle.

Khitai is a mysterious land in the East, home of powerful magic and ancient mysteries. Khitai is nearly legendary to the average Hyborian, although the more eastern people (such as the Turanians and Vendhyans) maintain considerable commerce with the kingdom of Khitai.

Khitai's borders are ill-defined, as no other "kingdom" lies near her. The Khitans themselves mark their western boundary at the Great Wall and the mountains upon which it's built. This mountain range runs north to the trackless, icy wastes, and south to the Southern Sea. 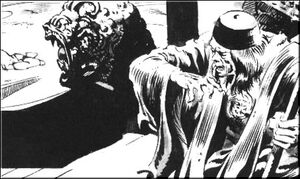 Over the centuries, the peoples of Khitai have merged into a homogeneous race: slender, of medium height, with parchment-yellow skin, slanted eyes, sharp features, high foreheads, and oval faces. Some regional variation exists (Southerners, for example, tend to be shorter and thicker about the waist), but the distinctions are almost invisible to Westerners. (They are very visible to the Khitans.)

Khitan behavior is wrapped in complex ceremonies. Each member of Khitan society has a place in the structure and codes of behavior which must be followed. These codes don't prevent personal initiative. The Khitans believe that those who best obey the codes will be rewarded by the gods. From this, they deduce that "the winner was right", and this success-oriented approach gives them a penchant for treachery or double-dealing which would cause a Hyborian noble to blanch.

One confusing aspect of these codes is the extreme politeness of the Khitan demeanor. Most western traders find this behaviour irritating, if harmless. However, successful traders recognize the traps concealed in this veneer of respect and watch their backs.

Khitan law flows from the overlord of a city-state. The overlord creates the laws and often personally judges major criminal cases, although most overlords appoint jurists to try and punish criminals. Fines are common, although for serious crimes or those who upset the status quo, mutilation and death are the usual punishments.

Unlike the Hyborian lands, where judges are often subject to financial influence, it's very difficult to bribe a judge in Khitai. On the other hand, a judge is often subject to the political concerns of his clan or faction, and may well ignore the law and the truth to accomplish some "higher" political purpose.

Just as Stygia has its Black Ring and Hyperborea its White Hand, the sorcerers of Khitai are bound into a brotherhood of power: the Scarlet Circle. The Circle, like its counterparts in the West, is a hierarchy of dominance. Each wizard is served by those who are weaker, and in turn serves those more powerful in the mystical arts. At the pinnacle of this pyramid stands the sorcerer Yah Chieng, ruler of the city-state of Paikang, whose demons and magic are feared by all in the East.