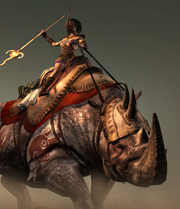 The Killer Rhino is one of the In-game Promotions. At launch the only way to get a Killer Rhino is by pre-ordering the game at certain retail chains where it is an offer.

With ferocious speed the Killer Rhino charges the fields of the Border Kingdom, plowing through hordes of enemy soldiers, sending them flying through the air.

The Devil’s Lance, the enemy calls them – incredible speed packed into a body intended to maim and slaughter. On their backs, skilled riders fight for control, carefully employing them in battle where the death of many is required in as short time as possible. In siege battles the Killer Rhino is a potent yet dangerous instrument of death thanks to its ability to brutally plow through large masses of enemies in a quick, brutal and lethal frenzy.

In Age of Conan: Hyborian Adventures players can acquire and ride their own Killer Rhino into battles throughout the Border Kingdom. At launch, the only way to obtain such a beast just now is to pre-order the game at select retail chains where it is on offer. Currently available exclusively at http://www.play.com and http://www.bestbuy.com

You will be able to purchase these later on in the games future.

Retrieved from "https://aoc.fandom.com/wiki/Killer_Rhino?oldid=45398"
Community content is available under CC-BY-SA unless otherwise noted.