Mitra is the most common deity worshiped in Hyboria, and is the chief god in almost all Hyborian kingdoms, including Aquilonia, Ophir, Nemedia, Brythunia, Corinthia, and even Zingara. 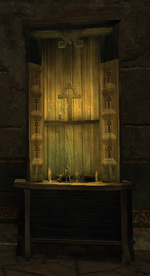 The worship of Mitra is a monotheistic one. There are a host of saints, but there must be no other god than Mitra. His followers are fervently suspicious towards other gods or religions, especially the worship of Set and the Pictish animal gods.

As opposed to Crom and Set, Mitra is a kind God, although he holds his followers with high standards. The theology is based on justice and a very strong sense of right or wrong. His followers are expected to strive for justice and are encouraged to forgive.

There is a huge clergy associated with the worship of Mitra, and one can find temples in his honor everywhere his influence is spread. Nemedia is home to the most devoted of Mitra's servants. Mitra's temples are conspicuously free of ornamentation. They are supposed to reflect the pious and ascetic ideal he holds over his subjects. Mitra doesn't need precious metals and elaborate ornaments in his honor. He wants dedication and prayer, not superfluous sacrifice; as he abhors the ritual of human sacrifice prevalent in many other Hyborian religions.

Mitra's name was recognized by Xaltotun, an Acheronian who lived around 13000 BC. Mitraism's real ascendancy probably began about 1400 years after Acheron's empire fall, when the Hyborian lands were once again menaced by the shadow of Set, and were largely saved through the efforts of the Mitraic prophet-hero Epemetrius the Sage. One of the earliest nations to embrace Mitra was Koth, around 11000 BC.

Today, the god Mitra emerged as one of the most popular gods, receiving worship from peoples in the kingdoms of Aquilonia, Argos, Corinthia, Nemedia, Ophir, and Zingara. In fact south of Nordheim and Cimmeria, Mitra worship was almost universal. It was rivaled here and there only by little cults of such as that of Asura, Ibis, Ishtar, and even, to some degree, Set. That last god was also Mitra's sworn enemy, as Mitra intervened in human affairs often to protect his own worshippers and humanity in general from Set's foul designs.

Some Mitraists are unique in having an unflinchingly monotheistic devotion to Mitra. While most people follow a type of henotheism, in which they acknowledged the existence of gods that they chose not to worship, some Mitraists held Mitra as the only god in existence. Not unexpectedly, this exclusivist view of Mitra produced intolerance of other religions at times.

Ostensibly, Mitra is a gentle god in contrast to Northern warrior gods such as Crom, Borri, Ymir etc. and supposedly taught mercy over vengeance. However, despite this, Mitra does banish people to a hell dimension for punishment, for as mankind's eternal judge, Mitra decided final assignment of souls to either there or a heaven world as a reward. Mitraic sorteriology preached salvation based on works, i.e. a person's life on Earth is judged based on his deeds in his or her life. Mitra, known to be attended to by a host of saints and angels, presumably dwelled in this heaven dimension.

Blood sacrifice is explicitly excluded from the Mitraic religion, the rituals of which have much simplicity, dignity, and beauty. As opposed to the case of the idols of non-Mitraic religions, the statues of Mitra serves only as emblems intended to represent the god in idealized form and not to be worshipped themselves.

Retrieved from "https://aoc.fandom.com/wiki/Mitra?oldid=59632"
Community content is available under CC-BY-SA unless otherwise noted.