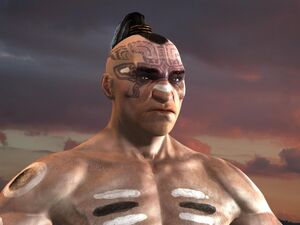 The Pictish Wilderness, or Pictland, is the last remnant of a great uncivilized west which remains after the Hyborian invasion. This region, which once stretched from the Western Ocean to the borders of ancient Acheron, now is reduced to a strip of wilderness a tenth its original size.

Pictland is bounded on the north by the Eiglophian Mountains, on the east by the Black River, on the west by the ocean, and on the south by Zingara.

The Pictish Wilderness is a virgin forest, filled with oaks and maples, and haunted by creatures thought extinct by the Hyborian world. Aquilonian scouts have reported sabertooth tigers, giant vipers, apes, and stegosaurus, as well as the more usual wolves, bears, and elk. Nearly any forest creature (either modern or prehistoric) might be found somewhere in Pictland, and the Pictish forests could conceal anything. In addition to the wide variety of normal animals, there are many creatures in the Pictish Wilderness who "remember" the worship of Jhebbal Sag. Such animals are generally slightly larger or more intelligent than normal, and are more easily controlled by Pictish shamans.

Picts are a primitive people, short and swarthy, with broad shoulders, deep chests, and black eyes and hair. Their culture is primitive, and only possesses occasional "modern" weapons either bought from the Zingarans or stolen from Aquilonian troops.

The Pictish tribes are very independent of one another. Each tribe is named for its totem animal: thus, there are tribes such as Eagle, Hawk, Turtle, Bear, Wolf, Wildcat, and Raven.

The tribe is ruled by a chief, who is usually the best warrior, with the cooperation and support of the tribal shaman. Pictish life doesn't provide for those who cannot defend themselves, so rarely is the chief position held by an "elder".

Picts are consummate hunters and trackers. They have no agriculture or animal husbandry; their dinners are brought in through their hunting skill alone. They are also nearly invisible in the woods; western Aquilonian fortresses have a large ring of bare "killing ground" to prevent Pictish ambush.

Picts have no understanding of Hyborian chivalry. To a Pict, there is nothing wrong with sneaking up on your enemy and slitting his throat before he knows you are there. On the other hand, Picts in pursuit of an intruder run screaming through the forest as they get close. This practice is used by the Picts as a way of building fear into their enemies.

Pictish weapons are the bow, flint-tipped spear, war club, and hatchet. They have little use for Hyborian swords or battle axes, although they prize steel daggers and hatchet heads. They wear almost no armor.

Not all Pictish relations are hostile. Zingarans occasionally sail north, trading Kushite ostrich plumes, jewelry, and weapons for skins, copper ore, and gold dust. Such trading is not without risk. A careless captain can quickly find himself on a sacrificial altar with Pictish hands at his ship's tiller.

The Picts worship the Animal Gods in the pantheon of Jhebbal Sag.

Picts use the heads of slain enemies as trophies. They hang them inside their huts or bind them to the altars of their villages. The Picts believe that if they bring the head of their enemy home, the spirit of the enemy will be forced to serve them in the afterlife.

Community content is available under CC-BY-SA unless otherwise noted.