In southern Stygia, the vast deserts eventually break into patches of foul marshland with tropical trees rising from the damp soil.

If one journeys further south, the marshlands turn thicker as the trees become denser, until a traveller stands near the edge of the Black Kingdoms and the lush jungle of those mysterious lands.

Between Stygia’s hostile deserts and the impenetrable jungles of the Black Kingdoms, the Purple Lotus Swamp spreads like a tropical smear across the kingdom. This region is named after the Purple Lotus, a beautiful flower which only grows here and nowhere else in Hyboria. Colossal marsh snakes glide underneath the silt-darkened lagoons, capable of dragging wanderers down into a watery grave. Deep tar pits riddle this landscape, filled with the bones of unwary explorers.

The Purple Lotus is valued by both sorcerers and assassins alike. For the former, it's a narcotic to enhance meditation, for the latter, an aid in killing. Consuming a potion made from the petals of a Purple Lotus leaves an individual paralyzed for several hours, though they remain awake and aware of their surroundings. Because of the flower's fantastic propertes, bands of lotus-hunters patrol the swamp in search for the main ingredient of their arcane recipe.

Recently, the swamp is now claimed as a sacred hunting ground by the Asitambuke tribe of Darfar. These hunters are led by a beautiful shaman named Wub – a priestess of the serpent god Damballah – with the slitted gold eyes of a serpent. Anyone venturing through the Purple Lotus Swamp is sure to run afoul with this Dafari clan at some point.

The Purple Lotus Swamp is a Resource and Building Area. Essentially, this means that it's an area where you can find an abundance of resources and places suitable for City Building. 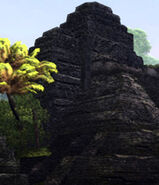 The village of Nakaset
Add a photo to this gallery
Retrieved from "https://aoc.fandom.com/wiki/Purple_Lotus_Swamp?oldid=59542"
Community content is available under CC-BY-SA unless otherwise noted.