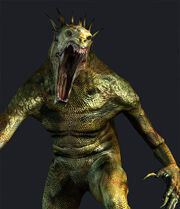 The darkest of all magic, and most dangerous alchemical experiments, are carried out by the sorcerers of the Black Ring Citadel. The chambers below have become polluted over the centuries, and this has left a strange effect on the lizards inhabiting in the lightless sewers below. Whether their evolution has regressed or accelerated isn't known for sure, but the existence of these hybrid humanoid reptiles is well known… and feared by the Stygian population above.

Their sub-human intelligence is driven by the worship of primitive gods; vile fusions of reptile, insect, and slime or tentacled horrors of living madness. Still, these god-like beings always heed the call of their worshippers and bestow alien, shamanistic spells on their most blood-soaked and faithful.

The Scaleskins are usually blamed for disappearances in the city above. However, they're more content with dwelling in the lightless chambers beneath and performing their cultish rites, but to what end is unknown. However, anyone foolish enough to trespass into their territory risks a grisly fate, being torn part aand consumed alive by these gibbering, howling monstrosities.

Community content is available under CC-BY-SA unless otherwise noted.