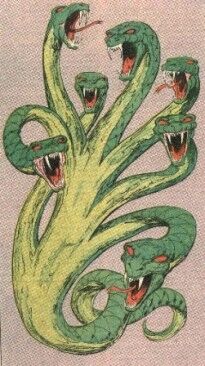 Set, the Old Serpent, is the arch-nemesis of Ibis and a deity once revered by the priest of Acheron. In the ancient kingdom of Stygia, Set is worshipped by devoted clerics who parse him with serpent-shaped idols. He's also known as Damballah within the Black Kingdoms.

Set is a cruel and jealous god who demands constant sacrifice from his subjects. Many of his priests are too willing to comply, as they place naked virgins screaming onto altars to appease Set's bloodlust. In Stygia, the snake is considered holy and killing a snake is a mortal sin (as King Conan himself once found out when adventuring in Stygia). If a snake slithers into the cities or streets, Set's subjects will lay prostrate before him, hoping to be found worthy of his bite.

Retrieved from "https://aoc.fandom.com/wiki/Set?oldid=59366"
Community content is available under CC-BY-SA unless otherwise noted.