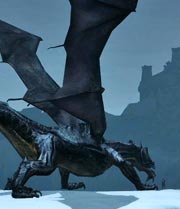 Atzel’s Approach offers a variety of torments to ensnare unwary travelers, and not all of them—not even most—are human. While the bandit groups under Atzel’s banner are a grave threat throughout the region, darker dangers exist. The greatest of these, and the father of many lesser evils, is the demon known as Vistrix.

Little is known of Vistrix in truth, and much of the death-filled rumor tied to the beast is born of fearful speculation rather than iron-hard fact. The tales spin into myths as the cold nights pass, blending legend and truth into one. Young mammoths are taken from their herds, torn from the earth by a great shadow and a thunder of swift wind. Snake-like inhuman beasts, the chill crawlers, crawl free of the entombing snow in obscene numbers and claw their way to the surface world. Those eking out a living on the slopes of the region’s mountains blame Vistrix for these acts. The demon carries the mammoths away to feed. The chill crawlers are the monstrous spawn of the dragon-thing.

Vistrix appears to be a new threat to the region, rather than some ancient evil well-known for plaguing Cimmeria and the Border Kingdoms for centuries past. All aware of the spreading evil in Atzel’s Approach know the arrival the demon-dragon coincides with the blossoming darkness. Whether Vistrix is the cause or another symptom of the foulness in the realm, none can be sure.

In form, the demon is a reptilian echo from a long-forgotten age when cold-blooded and scaled predator kings claimed the world as their hunting ground. Does intelligence—a human intelligence—gleam in its giant eyes? The answer to that depends entirely on which tales a traveler believes…

The Vistrix is a dragon-like creature and a new threat in the realm. It's not one of the foul beings that have haunted Cimmeria for so long, but has grown resentfully from the spreading evil in Atzel's Approach.

Vistrix is a demon, but manifested it self as a black dragon. Vistrix is living at his lair in Atzels Approach. The players in ''Age of Conan'' are sent to Vistrix to prove their worth to King Conan, so they can join the ranks of Conan's elite guard, the black dragons. As the quest log says "What better way is there to prove my worth to join the ranks of the Black Dragons, than actually killing one of the beasts!".

Used to dispell Vistrix's AoE stun. As such, it helps reduce damage from Vistrix's Breath, as the Breath deals much more damage to stunned targets.

It's used as an item which casts a small cone in front of the caster.

Vistrix must be pointed away from the raid, 90 degree to the side so the healers don't lose too much distance between the main tank and the raid. Might be an idea for the healers to time a big heal just as the breath attack lands on the tank, so the tank will be back on 100% as fast as posible. There might be some issues regarding this, as Vistrix almost always do AoE stun, and then breath attack. If the healers manage to get out of the AoE stun, or simply HoT up the main tank this won't be an issue.

Everytime the adds spawn the healers that are on the main tank will run back to the raid, this will ensure it won't get so chaotic. Then conquerors, dark templars, and remaining guardians can pick the adds up. The adds are then killed off by the melee in the raid, and the healers that are not currently casting heals. All ranged, and caster classes stays on the boss. Everytime the adds comes Vistrix moves towards the raid it seems, so thats a good way to know when the adds comes. Vistrix doesn't go to try kill anyone from the raid, but moves back to the tank straight after.

Place all the healers and ranged dps in a group far enough away from Vistrix so that they don't get stunned or get the breath, but close enough so that they can run in and dispell Vistrix's stun. Place all melee in a group with the tank in front of Vistrix. Make sure melee is boxed up as much as possible so they can be unstunned easily.

Vistix casts the AoE stun about once a minute and follows it up with a breath. While stunned, the breath hits for 5000-7000, but if you're not stunned the breath will only hit for around 1000-2000. The stun can be dispelled by using [Vistrix's Bane]. After Vistrix has stunned the melee group, one from the ranged group with [Vistrix's Bane] runs in and dispels the melee group. This way the breath comming shortly after will do minimal damage and should not kill any of the melee. If they have too little HP to survive the breath unstunned they have time to run to the side of Vistrix to avoid the breath.

The adds spawn regularly but can't take much damage. They are easily dealt with by the ranged group. When Vistrix is at 75%, 50% and 25% a lot of adds will spawn at once. These can be AoE'd. The adds are minions, so they can be killed off virtually instantly by certain classes.